Being critical/political is hardly a question of aesthetics primarily. There is no such thing as an inherently anticapitalist aesthetic or critical typography in a capitalist world because anything can and will be coopted and commodified at some point. Wether a design holds critical potential is entirely up to its context and content, because graphic design is by nature relational and context based. WHAT is it critical OF? Does it conceal or show its ideological cargo?

I guess a mere form can’t be political in itself.

Also, if designers would engage in political activism beyond making another design project out of it and instead, fight actual, personal, structural fights, things could actually move on.

What might often be mistakenly framed as critical graphic design seems to be honest graphic design. This is entirely up to approach and process and any aesthetic result just that: its result. There is no criticality to a mere form without its context. Design decisions in reflection of the given material and its context/implications can provide a critical framing or show something for what it is. This approach is unlikely to be realized within the predominant commodity fetishist graphic design production (typical »communication« design) and at best applicable to projects in marginal fields (design for »the cultural sector«). 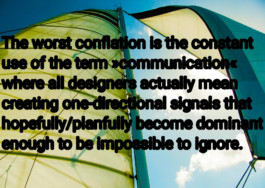 If you mean »changing society« as a rhetorical figure, yes, everything you bring into or take from society is a change, however microscopic it may be. If »changing society« is meant as in political change, supposedly progressive in nature and ideologically left leaning, the answer is yes, too.

As a graphic designer, you can »change society« just as much as anyone else with a comparable amount of power: by being a political subject and by also looking beyond your occupation.

If you work at an agency, discussing a supposed criticality in design works can help corporations coopt political movements as target groups – joining a union or forming a workers council can help improve the lives of all employees and, in the long run, change ideas of how work is done and acknowledged in the socalled »creative industry«.

Making typographic »political« posters and showing them on the internet can help your portfolio – engaging with political movements and participating in political struggle can help improve the lives of discriminated people and just about everyone else, too.

There are ways to engage in political struggles that are highly effective and go way beyond graphic design as direct (re)action. Graphic design can serve anything from product sales to propaganda, but it comes into play after a theoretical, ideological and strategic base was established and can’t be a substitute to that. When graphic design acts on behalf of a political struggle, it can be tremendously powerful – not only in the form of artifacts (the infamous MAGA hat¹) but also and even more so, in the form of a swarm of images and carriers (memes, general visual »languages« that become synonyms of ideologies²). The ideological power of capitalist advertising and marketing is enormous, but there are fields outside of that to engage in. Given the overwhelming hegemony of the »creative industries« as a field of employment and the niche existence of fields such as arts, culture and theory publishing or designed science publishing, the idea of the graphic designer as a direct political actor is rooted in privilege and narcissism in most cases.

¹ The MAGA-hat might be one of the most powerful graphic design artifacts of our recent history. It is not designed to be iconic, but it is part of a greater strategy and is ascribed to an overall ideology-complex instead of a creator. It has become a template, an icon, that acts as a symbol for a whole catalog of ideologies. 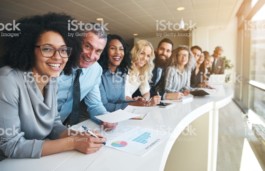 ² A completely depoliticized, phantasmatic narrative of what makes work in a capitalist world attractive.

»Smiling black and white coworkers looking at camera in the office«